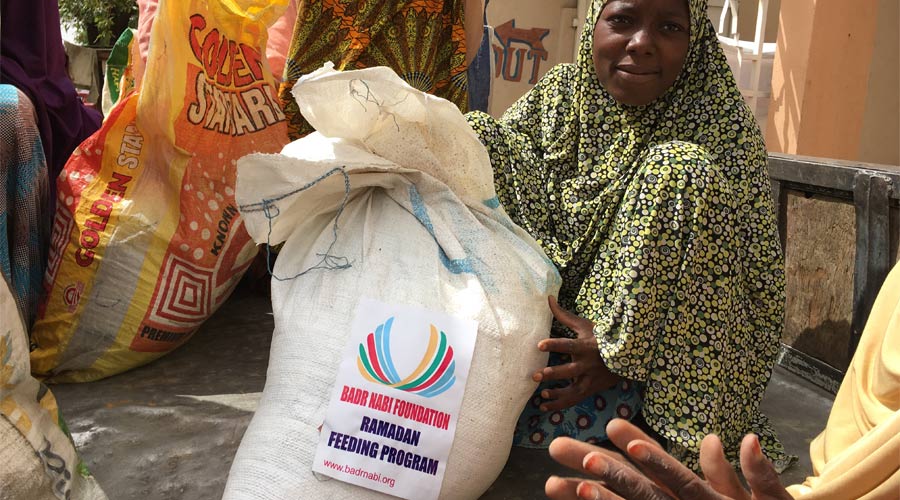 The blessed month of Ramadan is upon us again and Alhamdulillah we thank Allah the most beneficent the most merciful for being healthy and alive to reap the benefits of this great month. Sadly it is a difficult time for most of our fellow Nigerians as the country is still in the throes of a recession. Boko Haram has been pushed out of the cities in the North East leaving behind large numbers of internally displaced people most of whom are women and children with no place to live and little or nothing to eat. We found that a large number are being cared for by host communities who themselves are finding it very difficult to feed their families.

At Badr Nabi we have served more than 400,000 hot meals to families in need for nine years in more than nine states in the country. With the help of local mosques, schools, hospitals, orphanages, prisons, NGOs and traditional rulers we have been able to open more than 90 feeding centers. Unfortunately during this period the number of families at feeding centers and the requests we get for centers has grown exponentially. The good news is more and more young people are setting up NGOs which complement the work that we do.

The kind of hunger that we are seeing this year has forced us to vary our feeding program. We have opened eleven feeding centers and in addition for the first time we have started distributing food parcels. Each parcel contains 5kg of rice, 7.5kg of beans, 10kg of millet and a 2.5kg each of sugar and tea. The parcels for each family cost N10,000 including transportation and bagging. During our visits to IDP settlements we found that they were using old 50kg bags to protect their huts from the rain. So we put all the food we bought in 50kg bags which they would be able to reuse. Thus far we have distributed 250 parcels to IDPs in the Mulai area of Maiduguri and a 100 parcels to widows in Kaduna. Funds permitting we intend to distribute 650 more parcels in Kano, Sokoto and Adamawa by the end of Ramadan insha Allah.

“And what would make you conceive what is that steep uphill road ? [It is], the freeing of a slave or the feeding on a day of hunger an orphan relative or a needy person lying in the dust … “ (90:12-16)


We know times are hard but its even harder for the poor in our midst. Badr Nabi like many such foundations are doing a lot but each of us going the extra mile in our communities would have a bigger impact. In times such as these no amount is too small please give whatever you can spare.

‘don’t feel ashamed when giving a little for charity, because there is always goodness in giving no matter how little’ (Ali bin Abi Talib RA)

The Foundations website is back up and now we can share a lot more information about the work that we do and the other initiatives we have. It also has a payment portal for direct online donations. You can find us on www.badrnabi.org and on instagram @badr_nabi_foundation.

We pray that Allah SWT continue to make it easy for you to support us but if you are unable to, you can still support us by passing this on to your contacts or by becoming a volunteer. On behalf of all the people that we serve we would like to thank you and pray that Allah accept all your dua and ibadah.